So as I mentioned in my blog post 99 taps of beer on the wall , since I wasn’t able to include with proper reverence the final day of American Craft Beer Week held at The Libertine Pub in Morro Bay for the Dogfish Head tap takeover, I am, as promised, following it up. With the tag line “Off-centered Ales for off-centered people” (a category I proudly fall into) Dogfish Head Craft Brewed Ales are in my opinion some of the most unique and interesting ale-based concoctions in the marketplace today – and they have definitely proven to be an unconventional brewery.

I met Tyler the owner of The Libertine the night before at the Green Flash tap takeover of Dunbar Brewery and just about fell over at how young he looked – I mean I swear he barely looked 21. Dogfish Head is an in-high-demand microbrewery with limited production, so when Tyler said he didn’t think Bryan, the Cicerone for Central Coast Distributing, could get 20 taps taken over with all Dogfish Head’s beer, they made a bet; if Bryan filled all 20 taps Tyler would get a tattoo of the DogFish Head logo. Well Bryan was not only able to fill all 20 taps but he was able to bring in 2 more to total a 22 tap takeover, and Tyler is now sporting a tattoo of the Dogfish on his inner forearm.

The Pirate and his wenches

The day of the event we decided to meet up with some friends to have a delicious brunch at Dorns in Morro Bay (I highly recommend it) and then head over to The Libertine to meet up with the rest of the #ShareSLO street team. On our way we ran into a friendly Pirate who told us all about the Annual Morro Bay Mermaid and Pirate Parade that will be occurring on June 1st and who gladly took pictures with the pretty girls. We walked into the bar, connected up with the rest of the #ShareSLO Street Team and began our adventures in Ale. Because they were only pouring full pint glasses and not flights I didn’t get an opportunity to drink a glass of every one of the 22 beers, but I can honestly say I tasted all of them. Remember kids, with friends and alcohol, Sharing is Caring. The first glass I got was the Raison D’Etre – a Belgian Style Brown Ale with 8.0% ABV. It’s a dark mahogany color and is brewed with beet sugar, raisins and Belgian style yeast. Tasty but not in my top 3 of the day. The ones I really enjoyed were of course the 120 Minute IPA which I talked about in 99 taps of beer on the wall  and can range in ABV anywhere from 15-20%. This one came in at a cool 18%, as I mentioned in that post, and I like it best at room temperature. Interestingly enough their 90 Minute IPA (available commercially) has been rated a 100 point beer and is “perhaps the best IPA in America” according to Esquire magazine. This beer is best imbibed from a snifter. It has a nice malt back that holds up well to the extreme hopping rate.

The Chateau Jiahu is an herbed spiced beer and was my favorite of the day. It was in my opinion, Deeelicious – I mean it’s made up of some of my favorite things! They make this one with orange blossom honey, muscat grape juice, barley malt and hawthorn fruit. After fermenting the wort with sake yeast for about a month, they package it for sale. This beer has a 10% ABV and really does have a wonderful honey flavor. Think bread dripping with honey and then take it back a few notches. The Ta Henket is also an herbed spiced beer with the lowest ABV of the day at 4.5%. They  make it with Chamomile, doum-palm fruit and Middle Eastern herbs, then blend in an ancient form of wheat and hearth baked loaves of bread and you end up with a light and very unusual beer. Another really unusual beer was the Sah’tae (9.0% ABV) – we call it Chai tea beer. The wort for this beer is caramelized over white-hot river rocks and the beer is then fermented with German weizen yeast. Adding to that Finnish foraged Juniper berries, it is then flavored with black tea. It was very good – really a very cool and again unusual beer. In the same vein was the Namaste, a Belgian-style white Witbier which is made with dried organic orange slices, fresh-cut lemongrass and a touch of coriander. This beer filled with good karma is great for quenching a thirsty spirit.

After all this drinking and merriment it was time for an ice cream break, so across the street we went to the little ice cream shop and a double scoop of Rocky Road was just the thing that was called for. I knew that with all the sharing I was going to have to do just one scoop was not going to cut it. This I paired with the Palo Santo Marron, an Imperial Brown Ale with 12% ABV. This very dark ale was a perfect partner for the chocolate based ice cream, and is literally a meal in itself. It is unfiltered and aged in handmade Paraguayan Palo Santo wooden brewing vessels. This exotic wood imparts a strong and definite woody flavor to the beer mixed with caramel and vanilla complexity. The word Palo Santo means “holy tree” and has been used by South American winemakers.

These beers were the real standouts of the tasting for me and I really enjoyed them. As I mentioned there were 22 beers in total so here is a list of all the ones not included, so if you see them in the future you can try them: Hellhound on my Ale (Imperial IPA), Bitches Brew (Imperial Stout), Burton Baton (Imperial IPA) Immort Ale (English Strong Ale), Indian Brown Ale (Brown IPA and commercially available), 60 Minute IPA ( American IPA also commercially available), Sixty-One (American IPA), Noble Rot (Fruit Beer), Rhizing Bines (Imperial IPA), Aprihop (American IPA), My Antonia (Imperial Pilsner), Positive Contact (Witbier), Olde School (Barley Wine), and the Bierra Etrusca Bronze (Herbed /Spiced Beer).

The Libertine is a really up-and-coming Pub and they are now adding a Bourbon house on the top floor, so next time you are in Morro Bay, go in, check it out and tell ’em #Shedrinks sent ya. lol The Gang’s all here!

Come check out the next great event The 26th Annual Afternoon of Epicurean Delights benefiting The Health & Prevention Division of Community Action Partnership of San Luis Obispo County. Tickets are still available at: 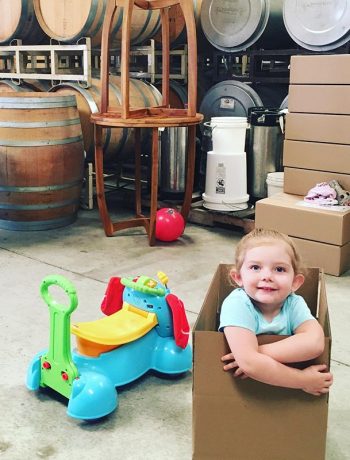 It’s club shipment time again! Our little elves are working very hard to pack the boxes for shipment on Monday. However if one should happen to arrive with your wine, kindly send her back. #wineclub #cutiepatootie #winerylife #wine