We attended the first annual BubblyFest by the sea, and although there are similar events in Europe and even South Africa, this is the only Sparkling Wine and Champagne Festival in the United States. Being that October is probably one of the most temperate times of year here on the Central Coast, the weather averages 75 degrees during the day and can drop to around 50 at night, this month is ideal for having a festival like this. The outdoor, weekend long event opened with a Great Gatsby themed cocktail party, and closing brunch taking place at Dolphin Bay Resort and the Grand Tasting along with a Press Preview, held at the SeaCrest Resort. As I mentioned the final event, was a Sunday brunch; unfortunately we were unable to attend that event so I can’t comment and will only be discussing the events we actually attended. 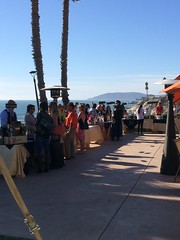 I LOVE bubbly and over-looking the stunning Pacific Ocean, as the water glistened upon the incoming waves, mirroring the sparkling bubbles in my glass #BubblyFest, was a great opportunity to try nearly 40 different Sparkling Wines and Champagne Producers, locally and from all over California, in one place. The event kicked off with a Press preview that went straight into the opening cocktail mixer, which meant we had to get dressed up before we left. At the preview there were about 15 producers who’d all set up their tables and we were each given a #BubblyFest etched champagne flute and since we knew we were going to the cocktail event after decided to focus our tastings on producers we weren’t as familiar with (we did that at the Grand Tasting a well). One of the more interesting aspects was what types of bubbles being produced. There were some very unique grape varietals, some of which I hadn’t heard of at all and some of which I had, but was only familiar with as still wines.

Brewer-Clifton “one of the only true “Grower” Sparkling Wine producers in Santa Barbara County”, was one such producer. They had used Nebbiolo, an Italian varietal from the Piedmont region and is considered a “noble grape”, therefore associated with being of the highest quality. Though it’s been around in Italy since the 14th century, this varietal is starting to gain traction in the US. The sparkling version was rose in color and had an easy effervescence, and was one of my favorites. I was looking forward to also tasting their Barbera version the next day at the Grand Tasting. 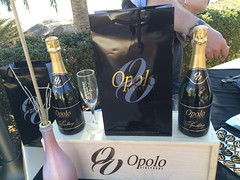 Although Opolo is known for their Mountain Zinfandel I was really excited to try their sparkling French Colombard, a white varietal related to Chenin Blanc, and normally used to make Brandies and Vin de Pays. I found it to be enjoyable and refreshing, it’s definitely a great sparkling for a warm day and was another one of my favorites. It’s actually more of a demi sec so a bit on the sweeter side, with medium-sized bubbles and hints of pit fruits and apples. After tasting it on it’s own Jeff (the rep), also added some of their Flirtations Moscato (still wine) to it for a little hot tub vibe.

The final note worthy sparkling was the Solminer  “Nebullite” Sparkling Syrah out of Los Olivos. I found it to be very enjoyable, and I kind of got the idea that it would pair nicely with some high quality smoked meats or go well with a Thanksgiving turkey and cranberry sauce. Reserving 2 barrels of their “Rubellite” Syrah blend, and with the help of  Steve Clifton (see above) they created a deep amethyst colored sparkling wine, with a spicy aroma and bright red fruits on the palate. 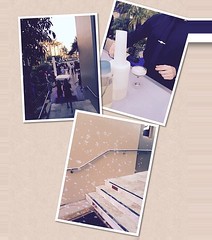 The Press event lasted about 2 hours and then it was off to Dolphin Bay for the Great Gatsby themed cocktail mixer by the pool. It was set up beautifully; we collected our new glasses, this time “saucers” and walked down the steps through a “carpet” of bubbles. A great local band The Tipsy Gypsies were playing jazz, people were dancing, and there were appetizers including fresh oysters, being passed around. A bar was set up serving 2 specialty champagne cocktails: the French 75 gin-based, with fresh lemon, simple syrup and a float of champagne and Bangkok & Bubbles, champagne-based with Serrano pepper, basil, mint, cucumber, ginger and lime zest (my favorite!). A fine time was had by all…

Saturday came around and we went to the SeaCrest for the Grand Tasting, where we were lucky enough again to each get a #BubblyFest etched champagne flute. The event had been strategically set up around the pool with a light appetizer area toward the bottom of the lawn, and 2 large tasting tents on each side of the upper lawn with a “mermaid” perched on a couch under a canopy, in the middle. We had a wonderful time walking around the event, talking to the producers and learning about how they grew and made their various offerings. The weather was perfect and the view was breathtaking. We did some general tastings and had an all around great time schmoozing with everyone. In the interest of time I’ve pulled out a couple of the more memorable wineries that we tasted to discuss, but that doesn’t mean there weren’t others that were just as good. 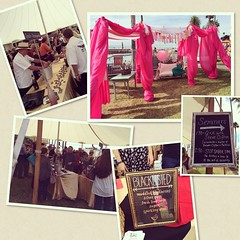 If you follow us regularly on Twitter or on Instagram then you may know one of our favorite places in town is Sidecar, so when I saw them at BubblyFest I couldn’t resist finding out what they were serving. They had created a champagne cocktail they named “Black listed” especially for the event.  Made with muddled blackberries, silver rum, fresh lime juice, sugar and champagne it was refreshing and a great start to the day.

The Noble Estate winery  2012 Passion sparkling wine has a beautiful nose, it is very tropical, floral and fruity on the palate and I got a lot of guava and rose petals. It’s definitely a semi sweet sparkling with a very, very mild effervescent meaning not a lot of bubbles. The next sparkling was the Noble estate Willamette Valley Oregon 2012 Muscat, very delicate and really picks up the special flavors and aromas of peaches, apricots, orange blossoms with very small bubbles. With the bubbles being so mild, I would have to describe it as more of a “semi”-sparkling. These wines are definitely on the side of sparkling for dessert, rather than an average meal. 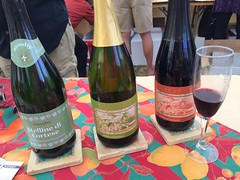 Mosby Winery offered 3 Italian style sparkling wines. Starting with a Stelline Di Cortese, translated to mean “Little Stars of Cortese,” it is a drier “Prosecco” style, with small bubbles and hints of tart apple. It is made of 100% Cortese grapes from the Piedmont region, most well-known for their Nebbiolos. The Stelline Di Erbaluce meaning “dawning light”, is a little more elegant and made in the “Spumante” style. It is less sweet, definitely more on the dry side with a floral minerality, and made with 100% Erbaluce.  Said to be an ancient grape varietal, the first written accounts of Erbaluce are as recent as 1606 when they were making it in a sweet wine style. The last one was the Stelline di Vernaccia, using 100% Vernaccia Nera it loosely translates to mean “common” and imparts a herbaceous “dolce” style.  and has small bubbles that dissipate quickly. From the Marche region, it is deep red in color and very, very inky, it was also my favorite of the three. 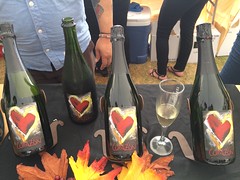 Clavo Winery named their Grenache based sparkling, Corazon meaning “heart” and is made in the traditional methode champenoise.  Even though it is made with Grenache Noir red grapes, the wine is “white”and fermented in the bottle, they also don’t add any sugar so as to show off the terroir. The grapes were picked before ripening for a very dry, tart green apple and unripened banana palate. According to the rep, it pairs well with a bit of absinthe poured in, which sounds like a good time to me!

All in all the entire event was well set up, although since there was only one table, serving light appetizers provided by Field to Table, sometimes there was a long line. To the credit of the organizers to make the wait more bearable, they had some of the appetizers passed around to those waiting in line and entertained them using the art of Sabrage to open the champagne bottles and generously poured it into the waiting glasses.

We enjoyed walking around tasting all the different bubbly. The weather was perfect and the view was breathtaking. We learned how some of the producers grew and made their various offerings, did tastings and had an all-around great time. They had even set up two different seminars, a Q&A with the Steve Clifton (Brewer-Clifton) and one on the history and how-to of Sabrage. A grand time was had by all and if you have an opportunity to attend the 2nd Annual BubblyFest next year, we’ll see you there!

“There is nothing more beautiful than a sunset, viewed over a glass of chilled champagne.”
Jared M. Brown

Sidecar is No Sideshow: A Foodie Mecca in San Luis Obispo?!