Toward the end of last year I was contacted on our Twitter by Taste.TV to be a judge for the 7th Annual Taste Awards. The awards recognize Media Tastemakers and are the “highest awards for the Lifestyle Entertainment Broadcast Industry. They are the premier broadcast awards show celebrating the year’s best achievements in Food, Fashion, Home and Lifestyle programs on Television, in Film, Online, in Apps, and on Radio”. 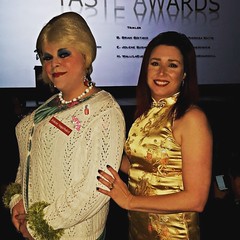 Me and Miz Jolene Sugarbaker

At first I was a bit skeptical because I wasn’t familiar with the organization but after they sent me a link to their website and I saw who some of the other judges were, I decided to go ahead and accept. I was sent some e-mails with passwords and links to segments from various shows from all sorts of broadcast mediums like online / YouTube programs including Jolene Sugarbaker the Trailer Park Queen, and her trailer park cooking show, and Gemma’s Bigger Bolder Baking show who’s “a professionally trained chef from Ireland”. Gemma’s show is about teaching “you how to take your baking to the next level with over-the-top recipes & baking secrets that are sure to impress”. Television shows like I’ll have what Phil’s’ having, America’s Test Kitchen , and A Chef’s Life, all on PBS to documentary films like CAFFEINATED and Nothing With Something: Death of a Diner. 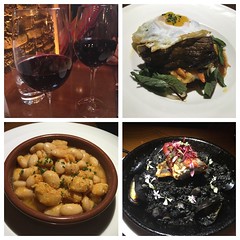 We decided to stay at the partner hotel, Hotel G in San Francisco (a funky boutique property) got settled in and left for dinner at Gitane where our friend, one of our favorite chefs’ Michael Reyes is the Executive Chef. We have been enthusiastic gastronomic supporters of Chef, and were really excited to see him. We walked down a charming alley to the restaurant and were seated in the upstairs dining room. After perusing the menu we ordered our food-Salmon Tartare with Avocado mousse, radish and frisée salad, with lemon cucumber; Basque Braised Short Ribs with Moroccan-glazed​ carrots, aligot potatoes; Navarra Trout wrapped in Jamon serrano, black garlic and calabrian chile sauce, catalonian-roasted vegetables; the Butter Beans side dish topped with Paprika breadcrumbs and a bottle of 2007 Tempranillo Campo Viejo, Gran Reserva, from Rioja. Shortly there after, incredible food started coming out of the kitchen, including a few delicious gifts from Chef, who came out between courses to talk to us about what we were eating. 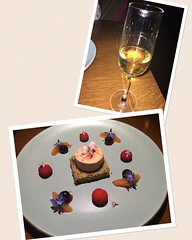 While waiting for our Salmon Tartare appetizer chef sent up some cups of that evening’s soup – pureed butternut squash, which was absolutely divine. Most of the time when we have had butternut squash soup it has some granular qualities to it, but this soup was silky smooth and perfection. He also sent up the Brussels Sprouts Salad topped with Lardons, manchego, apples, pepitas, lemon and honey vinaigrette. Normally I’m not a Brussels sprouts fan, but will always try Chef Michael’s because he makes them magically yummo! Chef came up and said he was going to make our main dishes but with a few tweaks, which we were all for. With the Navarra Trout that Doug ordered he put it over a black Paella and my Braised Short ribs were served with a fried duck egg on it (Again I was a bit nervous to try it but once again Chef was right, it was delicious!). Once we were done Chef came out and asked if we were ready for dessert because he had a special surprise and boy was it ever! Foie Gras terrine on “homemade” banana bread with manzanita berries, cherries and citrus slices, there are no words to describe this dish. The consistency of the foie was mousse like and acted like a rich whipped cream on top of the banana bread and he served it with a glass of Sauternes (a classic pairing with foie gras). It was heavenly. 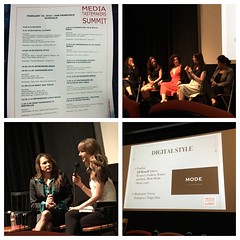 The following day we went to the Media Tastemakers Summit. We walked out of our hotel to grab an Uber only to run into Miz Jolene Surgarbarker who was also on her way to the Summit; so we all shared the Uber and ended up spending the day together listening to the speakers. The topics included things like Digital Culinary with panelists V. Sheree (Cuisine Noir Magazine), Gemma Stafford (Gemma’s Bigger, Bolder Cooking), Monique Soltani (WineOh.tv) and Alexandra Woodruff (Trowel and Fork) and moderated by Amy Sherman (Cooking with Amy); Digital Style with Jill Manoff (Mode.com) moderated by Teresa Rodriguez (Tango Diva); From Tastemaker to BestSeller with Joanne Weir and Tastemaker Content Creation and Distribution with David Woodley (WatchMojo). 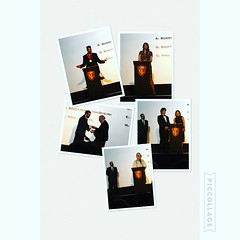 The next day we went to the actual Taste Awards ceremony at the Castro Theater which is simply gorgeous and walked the red carpet. The show went pretty quickly and was hosted by some recognizable names like Brian Boitano, Bobby Bognar, Carolyn Scott-Hamilton and Jolene. After the show we were invited upstairs for a post ceremony reception with appetizers and wine from various wineries and local restaurant sponsor partners. 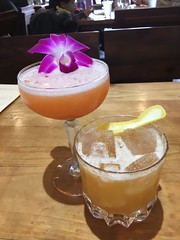 After the event we went back to the hotel hit the bar Benjamin Cooper, which is funky and cool “cocktail and oyster bar staffed by some of the Bay Area’s finest bartenders, with an emphasis on craft spirits and seasonal ingredients.”

All in all the whole judging gig was a lot of fun. I got to see some entertaining new shows and programming that I had no idea about, I got to meet some really cool people and eat fabulous food and drink great craft cocktails and wine. #Life is good.

“Follow your dreams, work hard, practice and persevere. Make sure you eat a variety of foods, get plenty of exercise and maintain a healthy lifestyle”. Sasha Cohen 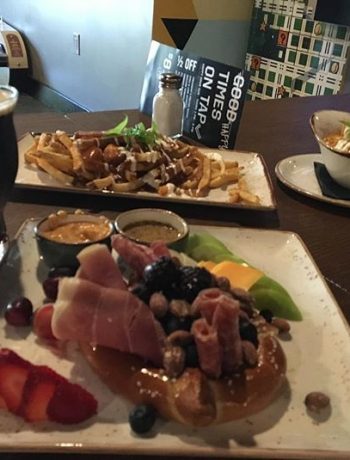 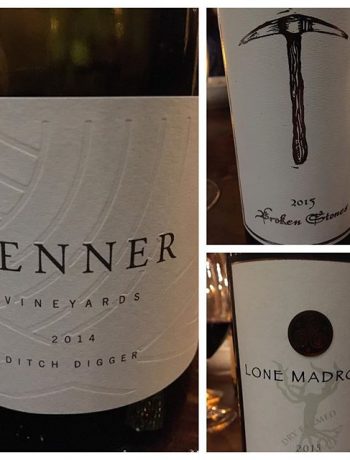