Lori and Helene at Moonstone

As my best friends in the whoooole world, Lori, Helene and I made our way to San Simeon (which you will read more about in my upcoming blog titled “Wine, Elephant Seals, and California Zebras?!?“) we made a pit stop at Moonstone cellars where, we were greeted by Jill and immediately started at the top of the wine list with the 2010 Selenite. A 100% Pinot Grigio that’s named for the Greek Moon Goddess Selene. This wine is fermented in all stainless steel and has nectarine, citrus, and minerals on the nose. On the palate it was very light and the citrus and minerality show along with some acidity.

The 2010 Albariño comes out of an area known as the Templeton Gap. Albariño is a Spanish grape varietal that seems to be showing up more and more prominently here on the Central Coast. This one is aged in neutral oak with light tropical fruits of papaya and banana which shows on the palate as well, as white peach and a touch of oak along with a bracing acid on the finish.

Their Silver Medal Winner is the 2010 “Slabtown” Chardonnay; according to the description on the tasting menu, in the late 1800’s Cambria was known as “Slabtown” because so many of it’s buildings were made of rough slabs of wood. Since it too is housed in wood, in an homage to “Slabtown,” this Chardonnay is made in the traditional California style and aged in 1/3 new French and 2/3 neutral oak barrels. This wine has a buttery nose and a nutty palate with creamy butter though not overly so, and it has a long easy finish.

Another 2010 vintage we tasted was the Viognier also out of the Templeton Gap. This wine too had layers of tropical papaya and pineapple on the nose, the palate shone with pineapple and apricot essences that finished with butterscotch and creme brulee that pulled off whatever was left of the 100% neutral oak that aged the wine. This is a very nice wine and easy to drink.

The last of the 2010 white vintages was the Gewurztraminer. This Gewurztraminer is what’s known as “off-dry” it’s not sweet and has 1.5% residual sugar. What I liked most about this wine was the Lychee essences both aromatically and flavor wise. Add to that aging in 100% stainless steel bringing forth honeysuckle and grapefruit with acid on the palate and this becomes a nice wine.

Alternately Moonstone’s Adularia, a sweet, dessert wine has 8.5% residual sugar. This blend of 45% Viognier, 45% Pinot Grigio and 10% Muscat won 2 Gold Medals at the Lodi fair and a Bronze at the Orange County fair. It’s a very light, sweet wine that’s refreshing but not syrupy. It has notes of pear and cantaloupe and would pair beautifully with pears and blue cheese. Or pour over vanilla ice cream for a real treat.

Next we hit the Reds, starting with the 2009 Tempranillo a wine full of plum and black fruit aromatically, after aging in  20-25% new French oak and the rest of the time spent in neutral oak. Known as the ” noble grape” of Spain this Tempranillo offers plum and black fruits on the nose and black plum and Bing cherry with mild spice on the palate. The winery in their tasting notes, suggests decanting this wine and serving it cool.

After the Tempranillo we tasted the 2009 Cabernet Sauvignon “Westside Reserve”. The Cab comes from the Casa Grande Vineyard on the Westside of Paso Robles and is a Gold and Silver winner at the Finger Lakes Wine Competition in NY and Taster’s Guild competition in Michigan. My first impression of the nose on this wine was it smelled to me of honey notes, which is unusual because that’s mostly associated with whites but not typically in reds, it’s underscored by vanilla and mild spice. The tannins were light and balanced with cassis, plum jam and spice on the palate.

Lastly we tasted the 2009 Cab Franc, this is also a medal winner, it won Silver and Bronze. It’s a big wine with obvious tannins and acid but nicely balanced. The Cab Franc is fragrant with violets, plums and currants and hints of mild chocolate. The wine is chewy and tastes of chocolate, cassis and mild white pepper.

Cambria is such a charming seaside village that if you are ever in the area it’s definitely worth a stop and a walk over to Nitt Witt Ridge, if for no other reason but to take a picture of the sign. Consider also, giving a visit to Moonstone, for some tastes and sips. They offer 6 tastes for $5 and all their tastings are done in Riedel logo glasses which can be purchased for $7.

An Afternoon of Epicurean Delights 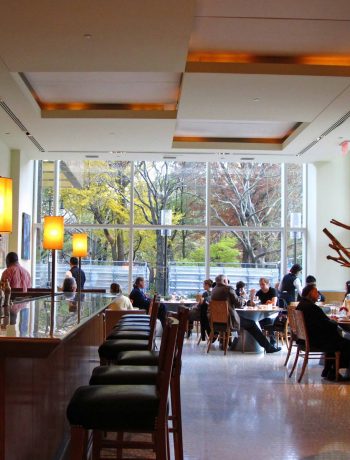