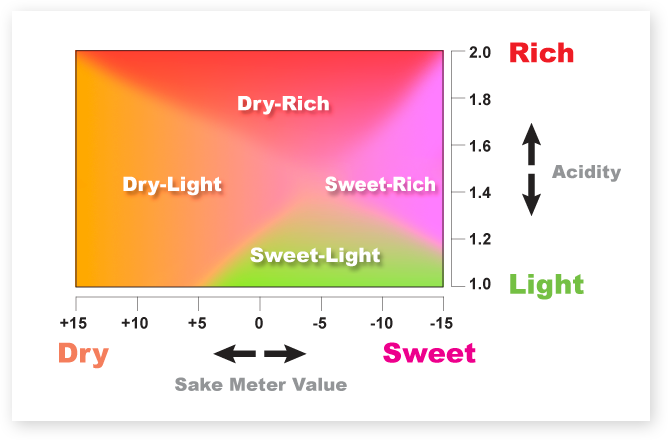 I have had this post in my queue for months now, waiting to be written. But I simply won’t write a blog on something I don’t know about or reasonably understand. So I felt even though I love it, writing a blog on Sake without true knowledge of the process or giving it its proper reverence and respect would be a disservice, not only to you and me but to the culture of Sake itself. After much research, talking on multiple occasions to experts in the field, and attending a BRILLIANTLY paired and presented Sake tasting event at Raku I think I am now finally somewhat qualified to wade into the shallow end of Sake-dom.

Sake is much more than a frivolously imbibed libation, it’s a deep seeded part of Japanese culture, dare I say an art even. To me great Sake is Japanese history and precision in a glass. The meticulous effort and precisely grown, prepared and polished special rice called Shinpaku-mai, along with the climate, and specifically chosen water from various regions in Japan is what differentiates the Sake that comes from each Sake house. The Sakes in Northern Japan for example are drier versus the Sakes from Southern Japan which tend to be sweeter, and shows how each region differentiates itself from the other. Or for example the Sake houses that were in Fukushima, will never be the same after the tsunami and earthquake because the water is now forever changed after the waves of salt water and residue left from the nuclear power plant drained into the fresh water system and has now affected much of the water quality in the area.

So, “What is sake, exactly?” you may be asking. Jizake, also known as Sake, is an alcoholic beverage whose traditional origins begin in Japan but is now made in America, Thailand, China and a few other countries. It is made of the Shinpaku-mai rice, water, Koji (a microbial mold) and yeast. Jizake is actually artisan Sake that is microbrewed and handcrafted in small batches, whereas these days Sake is usually machine-produced in large quantities. Sake can be served hot or cold depending on the type/category of Sake being served.  There are two categories of Sake: Junmai, which is considered pure and composed of Shinpaku-mai, water, and Koji culture with no other ingredients or additives (such as alcohol or sugar), and Honjozo, where alcohol is added to the sake during the brewing process, and is therefore considered a fortified beverage, kind of like the way port is. In this blog post though we are going to be talking about the Junmai category.

From there, Junmai  is further broken down into Ginjo and Daiginjo.  The important thing to remember is that what delineates the expensive premium sakes from the less expensive, down to the cheap, bulk sale (usually sushi bar hot Sake is found in that category) is how much the Shinpaku-mai is polished before being made into Sake. The brown Shinpaku-mai used is polished to varying degrees. Junmai for example is polished to 70% – the lower the percentage, the less Seimaibuai (polished rice grain) remains. Ginjo is rice polished down 40% or more and DaiGinjo 50% or more. The more the Shinpaku-mai is polished down, the more expensive the Sake it makes.

After the Seimaibuai gets to the desired percentage it is then washed and soaked. When the Toji (brewmaster) determines it’s ready, the Seimaibuai is steamed, then cooled. One of three kinds of Koji (black, green or white) is then added. Once the Koji microbial mold is added, the rice blend is now called Koji. 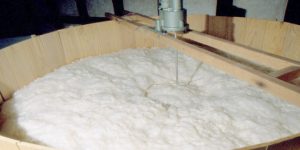 The Koji and yeast starter (which has a big affect on the aroma of the finished Sake), is added to the brewing water, and the resulting mixture or main mash is called Moromi. At this point the fermenting process is more like brewing beer than wine making, the Moromi first converts from a rice starch to sugar, and then ferments into alcohol. What differentiates Sake from other fermented beverages is that the two brewing processes, saccharization and fermentation, occur simultaneously (multiple parallel fermentation). When fermentation is completed, the Sake is pressed from the rice solids which separates the Moromi into fresh Sake and Sake cakes. The newly made Sake is then filtered, pasteurized and stored in steel tanks for 3-6 months before bottling. It usually ends up containing 15-19% alcohol, and is then shipped off for sale.

Sakes are rated on a Nihonshu-Do or Sake meter from dry to sweet, starting from zero (the neutral position) going up into the positive – being drier – and down into the negative – for sweeter.

There are several wonderful cold Sakes to get started with. Some of my favorites are Kikusui, or in English, “Chrysanthemum Water” which is a Junmai Ginjo, has a more neutral Nihonshu-Do and is very floral and fruity while being very smooth – a great “go to” sake. Sho Chiku Bai Ginjo, which is also a Junmai Ginjo though it’s a little drier with a Nihonshu-Do +5, is also a nice smooth Sake. Yuki No Bosha, the English translation being “Cabin in the Snow,” is another Junmai Ginjo with a Nihonshu-Do +1, and is light and soft with hints of fruit.

The Gekkeikan company makes two very nice Sakes: Black and Gold, a Junmai-shu, it rates at a Nihonshu-Do +0 while being a nice full bodied Sake and a great value for the money. And then my new favorite and one I’m going to have to get more in depth in another blog posting, their Ultra Premium Horin which is a Junmai Daiginjo, and a Nihonshu-Do +2 – so smooth and flowery it’s literally like drinking floral water. But be careful, it goes down like water too!

And lastly if you are feeling daring, you can always try Michinoku Onikoroshi also known as “The Demon Slayer”. According to my friend Chie it is so named because it’s SO dry that even a Demon will die of thirst after drinking it. This is a Jizake Honjozo, that has some fruit and spice on the nose and comes in at Nihonshu-Do +10.

There are so many wonderful Sake’s out there and even more to know about Sake that I couldn’t fit in this blog. But at least when I blog more about them you will have an understanding of the process that goes into production.

I’d like to thank these websites for their help in writing this blog:

Glass is in session