Doug and I have had some wonderful dining experiences at some amazing restaurants around the world; this however was not one of them. It takes a lot for me to write a negative review, I mean…A LOT! Since we started this blog we’ve never written what I would call a “bad review”. We might’ve said this or that could have been done differently or something to that affect, or this may not be for everyone; but we have never said…our experience was bad or disappointing. We tend to be very lenient because we know how things can sometimes just not go as expected and often will try a place 2 or 3 times before writing about it, just to make sure we’ve been fair.  However when one is going to a restaurant owned by a 3 Michelin Star Chef and is on it’s way to it’s first Michelin Star, one doesn’t expect to have to write something negative about the experience, or feel like crying as a result. 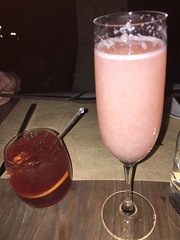 It was my first time in Manhattan and we were very excited to have our first high-end dinner (a day early, for our Anniversary) in New York at Nougatine at Jean Georges. It was highly recommended and we were told, on its way to its first Michelin star.  Initially everything started off very well, we were welcomed and seated at our table, our server Brian came over and introduced himself quite professionally and we ordered cocktails (both delish). At one point prior to ordering our meal, we were talking and Brian even offered to see if there was a table available at Jean Georges, but in looking over the menu we decided the menu options that night at Nougatine were more to our liking.

As many of you know, I am a new Sommelier so I was very excited to meet and talk to the Sommelier on staff to discuss the wine list and get her recommendations for our meal. Doug had already lovingly informed me that I was having lobster and he wasn’t going to take no for an answer, since he knows how much I love it. Tali came over, and was professionally friendly, we talked about being Sommeliers and how she was on her way to being a Master which is a huge accomplishment and made me even more excited to hear her recommendations for pairing our meal. So when I told her what I was ordering and she said, “You’re a Sommelier you should pair it yourself”, I was a little taken back. 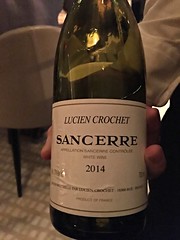 Of course I could pair my meal to my wine in a general sense but since I’m not familiar with how Chef incorporates the flavors of his dishes (as I’d never tasted his food) or how they were going to pair with the various wines on the menu, I was a bit thrown but decided to play along. I decided on 3 options; the Sancerre, Chenin Blanc and a Chardonnay and would have her tell me which she thought would best pair with my dinner. When she came back and I told her my thoughts she was still very cagey about making a recommendation and essentially I finally ended up asking her if she thought the Sancerre would pair well. She said it would be a fine choice and it was a very good pairing…she (and I) couldn’t have been more wrong. Based on her statements we decided to order a bottle ($79) instead of just a glass since Doug subsequently decided to order the salmon and we figured it would be a good cross over wine. It did go quite well with his meal. 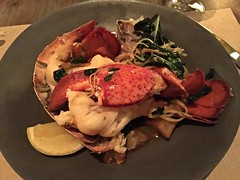 Brian came back and we ordered the Peekytoe crab salad and pea soup, both very good. We put in our main dish orders; Steamed Lobster with Golden Garlic, Ginger, Pea Shoots and Dried Chili and Sesame Crusted Salmon Sautéed Potatoes, Black Olive and Passion Fruit (puree) and Tali brought over the Sancerre which on its own was tasty. The real problems started when our meals finally came out…both seafood dishes were luke warm to cool. So we had to send them back to be reheated. Then I drank the wine with my meal…the dish appeared to be really mediocre, tons of ginger with a slight bitterness. Initially I thought that the wine neither enhanced the dish nor detracted from it, it just was. It wasn’t until later that I realized how much the pairing actually really ruined my dish. 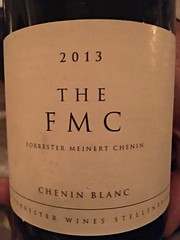 As we were coming to the end of our meal (I had about 4 bites of lobster left) another server –Gabe, came by the table to check on us. We started chatting, he also was the same level Somm as I but with more experience, and as we talked he said he never would have paired that particular lobster dish with the Sancerre, the Chenin Blanc was a much better choice. I was shocked! That was the type of guidance I’d expected from Tali. So I asked if I could get a taste of the Chenin Blanc to try with my dish. When I tried it…what was left of my entire dish transformed! It went from mediocre to almost magical! I wanted to cry…I literally wanted to step back in time and order that dish with the Chenin Blanc. When I asked about where Brian was since he hadn’t come back to check on us since we’d gotten our meals, Gabe told us that Brian was no longer our server, he had gone into Jean George to work and Tali had gone home. No one bothered to tell us this nor did anyone come over with Gabe to introduce him as our new server.

Gabe ended up being the game saver for us that night…he was warm, friendly, enthusiastic, and had great recommendations. Even though we weren’t planning on having dessert Gabe was so excited about having us try a dessert wine with their Butterscotch Pudding that we just couldn’t say no, and he was right it was delicious. He literally changed the entire tenor of the evening; we even called over the manager to tell him what happened during the evening and how Gabe made our night. He listened, apologized and pretty much just tried to placate us, nothing more and we left.

Then around 2 a.m. it hit, poor Doug ended up spending most of the night vomiting, with food poisoning! His $200.00 (approximately) dinner, straight down the toilet…literally. Later on that day with his stomach still sore and sensitive, he called the restaurant to speak to the manager, and let them know about his food poisoning so they could look into why it happened and make sure it didn’t happen to anyone else. He was put on hold for somewhere between 5-10 minutes before they came back and said the manager would have to call him back. To this day, we haven’t heard word one.

Disappointed doesn’t even BEGIN to describe our feelings with regard to our treatment and experience with Nougaitne.

Food should be fun. ~Thomas Keller