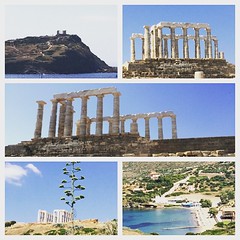 Temple of Poseidon at Cape Sounion

Restaurant at Sounion (with the blue roof)

After leaving Lantides winery and Peloponnese; we went back to Athens and had an amazing day with Michael’s uncle who took us to Cape Sounion where the Temple of Poseidon is. Going to the Temple was probably one of the most spectacular and spiritual places I’ve ever been. Because it takes a bit of a drive to get there since it is about 40 miles east of Athens, at the southernmost point of Attica, the temple isn’t overrun with tourists like the Parthenon and Acropolis were. The vibe of Sounion was incredibly powerful, both Doug and I were overcome with emotion, and the entire experience for both of us was indescribable. The history of the cape and surrounding Aegean sea is plentiful including King Aegeus ended his life by leaping off the Sounion cliffs into the sea now bearing his name, because he thought Theseus had died; where Phrontis died and is buried; regattas have been held since ancient times in the bay below in honor of Poseidon; and where the Athenians dedicated one of the captured Phoenician war ships after the battle of Salamis. After our incredible experience at the temple we went down to the oldest seafood taverna on the beach I think it was Elias’ Taverna but can’t be sure because of course, the sign was in Greek but you could see it from up on the cape and it had the blue roof. The food was fresh and delicious and we very much enjoyed pairing it all with Oyzo (Ouzo). It was truly an unforgettable day. I can honestly say if you only have an opportunity to see 1 temple…this is one to prioritize. And if you are there during the summer, take a bathing suit so you can swim in the Agean sea. Talk about dipping your feet into history!

Our meal at Aleria

That night Michael’s brother Paul took us to a wonderful dinner at Aleria restaurant. We pulled up to a building that seemed like a house and proceeded into one of the most charming restaurants I’ve seen. We were escorted up stairs to the Solarium room and were treated to an unforgettable dinner. Paul brought some incredible wines that were paired with the multi-dish meal that started with fresh bread and a goat cheese plate, included a delicious ox tail pastitsio and ended with an incredible dessert. I would like to tell you the names of every dish we had but they had been ordered for us in advance of our arrival and the names were all in Greek! We had a wonderful evening chatting with owner Nikiforos who couldn’t have been more welcoming and gracious. 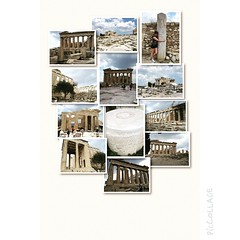 The Parthenon and Acropolis

The next day we went to the Parthenon and the Acropolis. I’d hoped to have the same spiritually exquisite experience as we’d had a Sounion, since I’ve always had more of a connection/ fascination with Athena but sadly I didn’t. The Parthenon has become so commercial and been “rebuilt” so many times, it has lost its sacred essence. I definitely recommend that people go to the Parthenon because it is beautiful but just realize it’s super commercialized and can be extremely crowded. Also just a tip, wear comfortable shoes and avoid going in the rain. The marble steps are centuries old and really worn, so they can be very slippery. 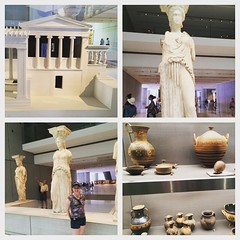 The museum at the Acropolis is definitely worth the time and cost of admission. The antiquities are spectacular and even walking into the museum is cool because of the Plexiglas walkway over the live excavation site. Also there, is the Theater Dionysus which includes the amphitheater and City Dionysia smaller theater. For those theater majors out there it is really spectacular to sit in the theaters that hold so much ancient history. 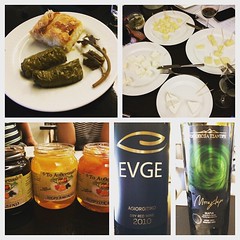 The next morning it was time to start our trek north toward the Sithonian Pennisula, on the way we stopped in Volos, located in the region of Magnesia and one of the most prominent port cities in Greece. The city sits at the base of Mt Pelion and near the ancient city of Iolcos. The mythical history of the region is the as birthplace of the Centaurs (part equine and part human), and the origination of the Argonautic expedition to get the golden fleece. That afternoon we were taken down into the lobby where we were introduced to multiple food and wine vendors who were interested in our opinions as American foodies of their products. We got to try various  Greek cheeses, wines, salted fish, Dolmas, Tiropitakia (Greek cheese pies) and spoon sweets. It was such an honor and a great opportunity to try some very good customary products by small producers. 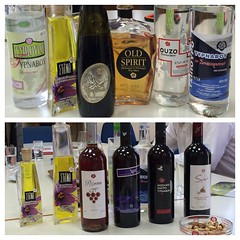 Then it was up to Tirnavos at the base of Mount Olympus. We stopped by the Agricultural Winery Cooperative (AWC) of Tirnavos for a tour and tasting of their wines, ouzo, and Tsipouro (the Greek version of Grappa) which is made from distilling grape marc (also known as pomace). The AWC was established in 1961 as a cooperative of about 300 wine growers who primarily grow the Black Muscat variety and is the only grape used in the wines, ouzo and tsipouro produced there. It also happens to be one of the best cooperatives in Greece and one of the largest. All the wines are what they call “Fresh” meaning they are all  stainless steel fermented, not aged in oak and meant to drink immediately upon purchase. One of their most popular wines is a spritzy dry white that comes in a pop top bottle much like a bottle of beer.

After leaving Tirnavos we drove up to Thesseloniki where they had just had the big “OXI” (no) protests during the Greek bail out discussions. The mood in the square was festive and joyous, people on both sides seemed to having a good time. We ate at a lovely restaurant, Agioli over looking the bay.

The next day we made our way up to Porto Carras for the next 5 days of our trip.  Considering this was THE place I’d represented as Ambassador for months and whose wines I loved and promoted, I couldn’t wait to finally get there to see the Domaine and all the property has to offer. As I had to wait, so will you so stay tuned for the final installment, My Greek Odyssey-Gamma coming soon!

Nothing more excellent nor more valuable than wine was ever granted mankind by God.`  Plato, Greek philosopher, (c. 427-347 BC) 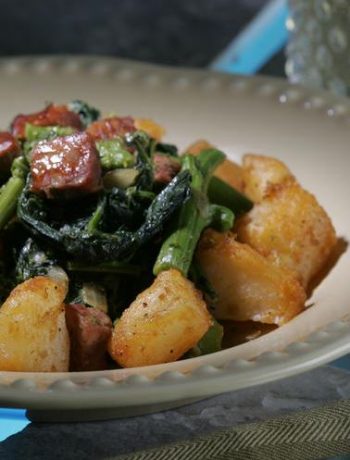 What a (Greek Wine) TRIP!