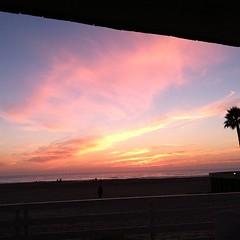 Aside from the stunning beauty, incredible wineries and breweries on the Central Coast, now we have a distillery trail! Our distillery trail is made up of 5 different distilleries: WineShine, Krobar, Red Soles Stillhouse, Re:Find, and Pendray’s Distillery, and it’s growing. Until recently I’d only been to WineShine, but a few weeks ago I went on a media distillery tour with BreakAway Tours to there and 2 other great distilleries, Re:find and Krobar.

The day started with meeting up at the Arroyo Grande offices of Breakaway Tours where I connected up with owner Jill Tweedie, Kathy Marcks-Hardesty and her husband Dan, and boarded their 25 person mini coach to pick up Haley Thomas and Robin Wolf (of SLO Bitter Co.) in downtown San Luis Obispo. Then it was up to Paso Robles to pick up Matt and Annie, Camis and 2 other couples and on to our first distillery. 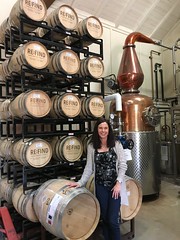 We pulled into Villicana/Re:Fined and were met by Monica the wife of winemaker and distiller Alex Villicana. The winery focuses primarily on Bordeaux and Rhone varietals but they distill their spirits from Rhone style ripe red wine grapes from the originally planted 13 acre vineyard, but they also buy juice from other local wineries. Re:Fined is a batch distillery, so there is going to be variance between releases and vintages. They use the saignée method (similar to carbonic maceration for juice extraction) to “bleed a percentage of the free-run juice from red wine grapes before fermentation to concentrate and enhance the quality of their red wines, and this bleed, the saignée, is often discarded (not good for the leach-fields)”. In 2014 they saved 50 farmed acres worth of rosé juice, just by distilling it. By fermenting the bleed and then triple distilling it, Re:Find Distillery has found a new use for saignée” and they are able to utilize the totality of the winery’s assets all year long, by making both wine and spirits. 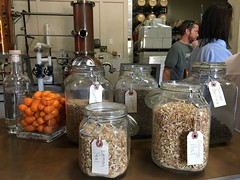 Re:Fined makes multiple types of spirits made from the same neutral base spirit but with different methods and ingredients added. Vodka for example is actually a method of distillation, and 8% of the world’s vodka is grape or potato based. The keys to distilling are to use high quality fruit; a clean distillation process; distill until there is 45% alcohol to stabilize; use the heart or sweet spot of pure ethanol; and when tasting distilled spirits, always start with the base product so you have a quality baseline vodka or neutral spirit.
Their Stills made in Germany are state of the art, and made with technical precision. They have named their two small stills Carl and Carla and the large one Charlie. They also use smaller 15 gallon “funsized” barrels to accelerates aging time and it’s also where their bourbon and rye whiskeys spends the first 2 years during the aging process. 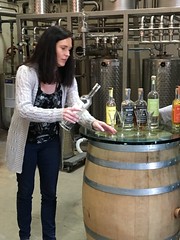 Monica brought out several of their spirits for us to taste. So starting with the Vodka; it had rose petal characteristics, was viscous and round with a long finish, and it’s also the base for all their clear spirits. Next we tried the Cucumber vodka which is distilled using only local cucumbers, and there is no imitation or extract flavoring added as an enhancement, making the flavor pure natural cucumber. They use the entire cucumber including skins, so it is rich in flavor and nose, with a soft sweetness (from glycerol). Glycerol helps with viscosity; it softens the flavor and rounds it out. It also creates the legs / tears when swirled in the glass. Then we tasted the Kumquat liqueur made from organic kumquats and their vodka base. The liqueur has a potent citrus flavor, and my first impression was literally “Wheeew!”, because it was bitter and citrusy, with a slight sweetness.

Their Gin is 51% juniper berries (as required by law) and in addition to other botanicals is made with orange and lemon peel, lavender, coriander, and juniper. You can definitely pick up the lavender and the juniper berry is very prominent. Another seasonal favorite is their Lemoncello. They use 12 tons of hand zested Femminello St. Theresa lemons (an Italian variety from local grower) and Demerrara raw sugar, both imparting a beautiful rich flavor not overly sweet and with slight bitter zest finish.

An important thing to remember when buying spirits is to always look on the label at who produced it and the “bottled by” to see who is actually MAKING the spirit. Also to make sure you are getting your spirits from exactly the distillery you want, it must say “DISTILLED by…”.

Here is a drink care of the distillery you can make yourself. I haven’t tried it yet but it sounds delicious! If you make it please comment and let me know how you like it.

Add ingredients and stir. If using cilantro muddle the leaves in the bottom of the glass. Add ice and the remaining ingredients. Enjoy! 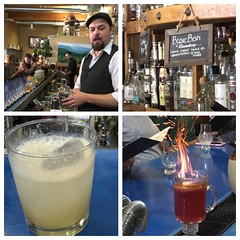 Next it was off to lunch and a cocktail tasting at Fish Gaucho, a restaurant in Paso Robles specializing in California Mexican fusion cuisine, and tequila bar.  At the prix fixe luncheon set out for us we enjoyed the Salsa Trio & Morro Bay Guacamole with Chips to start, then the house cobb salad called El “Cobb”ron, Carnitas Tacos and Chicken Verde Chilaquiles. Everything was delicious. After lunch we were treated to a cocktail making demonstration by bartender and mixologist Matt at their bar. We all gathered around the bar and Matt showed us some of his talent. First he made a drink called The Highwayman (and kindly gave me the recipe to share with all of you) it was very refreshing with hints of honey, citrus and lavender. He also made a pretty spectacular drink named Pendrays Potent Panacea which he proceeded to set on fire…talk about a spectacular looking drink.

Serve in a Rocks glass on the rocks. 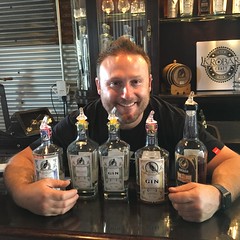 After lunch it was off to Krobar Distillery the brain child of Stephen KROener and Joe BARton who have created a very diverse distillery that makes both grape and grain based spirits, as well as Bitters, Sweet Vermouth, and Absinthe. They both started in wine and have extensive alcoholic beverage making experience (40 years between the two of them) and besides the distillery, still have working wineries on the property; Grey Wolf Cellars by Joe along with Barton Family Wines, and Stephen’s winery Silver Horse Winery will soon join the pack.

When we walked in we were welcomed by Stephen, who started to immediately take us through their offerings, while talking us about their process. Their base grape spirits are made with Grenache, Syrah and Mourvedre (GSM) grapes and once distilled, they don’t fine their brandies. Their neutral spirits are grape based and don’t see any wood, they save that for the grain based spirits.
The Stills are 100 gallon pots and once the GSM juice is distilled, it is turned into 10-20 gallons of 120 proof alcohol. The guys spent 4 years researching stills and still makers and finally decided on using Vendome Copper and Brass Works out of Louisville Kentucky to make their stills. “Their decision was influenced by many factors. First, Vendome is an American company with hard-working men and women who make kick-ass production stills.  Second, Stephen and Joe wanted a still they could design to meet all their distillation desires and Vendome had the skills to build their still.”

Their Botanical Brandy, technically Gin is made of the standard 51% juniper plus 12 other botanicals, including elderberry and pink peppercorn. I found the pink peppercorn was quite a prominent flavor and this gin had more of a juniper traditional gin note than the Re:Fined version.

The grain based Gin is 100% rye grain, made with black peppercorn, evergreen and lavender, and is made in a contemporary American style. The Single Barrel Gin is 90 proof, made in rye whiskey barrels and aged for 4 months. It has clove and nutmeg notes but is not infused with either, those flavors are imparted by the barrels. Unlike the Gin, the Rye Whiskey is 92 proof and made of 85% rye including a 15% malted rye blend from 8 different barrels. However much like the Single Barrel Gin, the notes of caramel, vanillin and slight orange are derived from the wood itself, none of those flavors are added.

In addition to the standards, Krobar’s Sweet Vermouth is made from a port that was aged for 6 years inside and outside and their Absinthe is made with wormwood (a thujon hallucinogen with a bitter kick), fennel and star anise. They are also working on the “Bitter Project” making bitters like ollaliberry bitters and orange bitters w/ cocoa nib, cherry bark, and angelica root. The Absinthe bitters are made in a rye whiskey base, creating a very strong bitterness with woodsy characteristics. 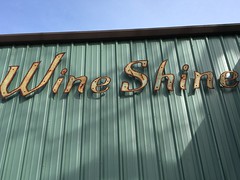 Then onward to our final destination, Wine Shine. As I’ve already written an extensive blog on them called Shine On, I’ll hit a few of the highlights of this most recent visit. Patrick was the only one behind the bar this time and really wanted to emphasize that as distillers it is very important to them to maintain the essence of the grapes and keeping that fruitiness in the brandy. They were a little light on inventory so our tasting of brandies was limited. Our tasting included the Turkish Fig; Burnt Orange which contains 5% sugar; the Hibiscus Lemon aka LPR (liquid panty remover) carries a %47 abv and is made with Meyer lemon; Cinnamon (which while delicious, wasn’t as strong in cinnamon flavor as it was last time, but that is indicative of the variations from batch to batch at a craft distillery); and the Manhattan Project. You may remember from the last blog that they were just about to release the Manhattan Project made from their in-house brandy or their whiskey, bitters and Vermouth (made from Viognier grapes that “went bad”) blended together and ready to drink right out of the bottle. Well it’s out now and ready to go, so make sure you taste it if you ever get a chance.

The day was awesome, I’m really glad I was able to go, and grateful to Jill for inviting me. It was great to get re-acquainted with old friends and meet new fantastic people on the tour. If you make it to the Central Coast and are looking for a little something different to do or as an adjunct to a wine tasting weekend, I highly recommend going on the BreakAway Tours and Events distillery tour with a lunch stop at Fish Gaucho.

It pays to get drunk with the best people. ~Joe E. Lewis

How I Got Fried at Tanner Jacks

Get your Mac on!!