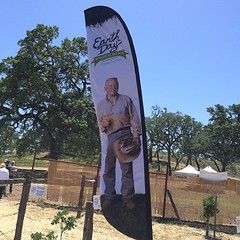 I don’t know about you, but I LOVE my planet. Whether you call her Earth, Gaia, Mother, or Terra she is the only planet we have and celebrating Earth Day is a celebration of all that we as a species should hold dear. The 8th Annual Earth Day Food and Wine Festival held at Castoro Cellars, was quite an event and according to vendors, one of the most well-organized events they’ve ever participated in. 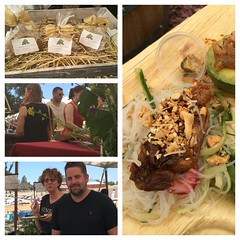 A day of deliciousness

Even though this is a multi-day festival, we only attended the main event. Upon arrival there were several pavilions set up around the field. with local eateries and chefs serving sustainable farm to table foods and various winery booths providing all in a “casual low-key atmosphere”.  We walked into the event, picked up our glasses and made our way to the first table. We tasted a flight from Morgan Winery. Their flagship Double L vineyard (known as the crown jewel of the SLH) which is organically farmed, is located in the Santa Lucia Highlands AVA  and is in close proximity to the Monterey Bay. It was then I realized I needed to get a bag so I could carry all the business cards and brochures I knew I’d collect so we went over to the information booth and picked up a swag bag which had some great samples from some of the vendors. Then it was off to eat some of the amazing food that was being prepared. 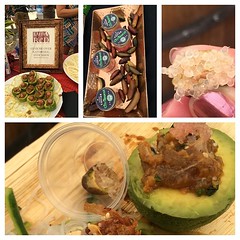 Ceviche over “gator egg” avocados and topped with Citriburst caviar

One of the food items being served that really stood out for me was this very interesting citrus fruit called a Citriburst “finger lime. Known as a micro-citrus it was originally found growing wild in Australia and is probably the most unusual thing I’ve had. The fruit range to about the size of a pinky finger, and was cut in half. The inner pulp to me has a similar texture to Masago (smelt eggs) and “the flavor is similar to that of a lemon-lime-grapefruit combo, the juice bursts from the citrus pearls when bitten into.” Hence why they are best described as citrus caviar. 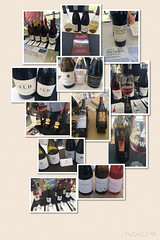 Walking around the event we got to visit great wineries we’ve written about, know and love like Claiborne and Churchill; Justin; Wrath; Laetitia; and Clavo. Some we know well, but haven’t had a chance to write about yet like Chronic Cellars who makes one of our favorite bottles of bubbles, Spritz and Giggles; RiverBench known for their Pinot Noir and Chardonnay; Ancient Peaks Winery one of the larger wineries on the central coast and part of which was planted by Robert Mondavi; Tooth and Nail which is one of 4 brands Stasis, Force of Nature, and Amor fati owned by Rob Murray Vineyards and has a beautiful new tasting room in Paso Robles; Niven Family Wines located in the Edna valley and their 6 different brands; and Derby Wine Estates, where in 1998 owners Ray and Pam’s aspirations of retirement went straight out the window after moving to the central coast and purchasing their first vineyard property, now known as Derbyshire vineyard.  Then there are the wineries that we’d not tasted before like Ridge Vineyards who source their Zinfandel grapes from the famed Benito Dusi Ranch, whose family has owned the property since 1924. Ridge has 2 winery locations, one in Sonoma County’s Dry Creek Valley and in the Santa Cruz Mountains on the Monte Bello Ridge; Mitchella Vineyard and Winery owned by Angela and Darren Mitchell who credit a 1987 Eberle Cabernet Sauvignon for starting them on the path toward wine making, vineyard ownership and now producing up to 2,500 cases of wine annually; and San Antonio Winery owned by the Riboli family, and has locations in both Paso Robles and Los Angeles. It is known as the oldest producing winery in L.A. with over 97 years of wine making. Mixed in amongst all these wonderful wineries was our local distillery Re-Fined who use grape spirits derived from their Villacana Winery to make handcrafted gin, and vodka. 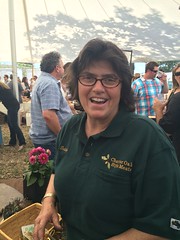 Another phenomenal local purveyor at the event was Debbie Paver; Rancher, 4H club leader and owner of Charter Oak style meats where she raises lamb, pork and some of the best grass-fed Angus beef we’ve ever tasted. Though she specializes in beef, she also has the most amazing ham we’ve EVER had! Debbie is a down home, hardworking, great lady. She raises her animals locally in Templeton, with no hormones, animal-by-products, or antibiotics. Her beef is dry aged, naturally USDA inspected and get this…she does home delivery. NOW, when I say home delivery, I mean you call her, tell her the cuts and type of meat you want, and she shows up at your door with Coleman coolers filled with several options for the cuts you’ve ordered, lays them out on the table and you just pick the ones ya want. She has been raising her animals for 30 years and knows which steer each cut came from, and can tell you everything you’d ever want to know about it before it got to your table. We’ve even been able to order specific sizes for the cuts of meat we got. This day she was with Chris Kobyashi, the chef and one of the owners of Aritsan Restaurant in Paso Robles who was using her beef in a dish that he was serving, most of which was gone by the time we got over there because it was so popular.

There were a few wonderful desserts and treats being sampled as well. There was cashew brittle from family owned and operated California Cashew Brittle Co., where they handcraft the brittle one batch at a time with simple ingredients of the finest butter, sugar, and cashews. Heavenly Squared Brownie Co., had samples of their absolutely appropriately named heavenly brownies including peanut butter, NBC (nothing but chocolate) butterscotch and several others. Stay tuned for more on that in another post to come about a wonderful wine and brownie pairing we attended recently. The Chocolate Stache is an artisan chocolate company who tailor make chocolates, from the type of molds, to flavors that pair with wine and other beverages and for special events.  Manzanita Manor (MM) Organics focuses on 2 things, walnuts and “the only certified organic port style dessert wine grown and crafted in the United States”, both delicious but their chocolate covered walnuts are ridiculous!

There is only one planet in the universe that humanity and other our other brethren species can inhabit, and that is Earth. Celebrating Earth day is like celebrating a birthday, it shows we haven’t forgotten how important our planet is and how much we care. What better way to remember her and the bounty that our home provides us everyday, than enjoying the fruits of her and our labors in a glass and on a plate in celebration? So start making your plans for the 9th Annual Earth Day Food and Wine Festival now. Hope to see you there!

“Wine is one of the most civilized things in the world and one of the most natural things of the world that has been brought to the greatest perfection, and it offers a greater range for enjoyment and appreciation than, possibly, any other purely sensory thing.” ― Ernest Hemingway 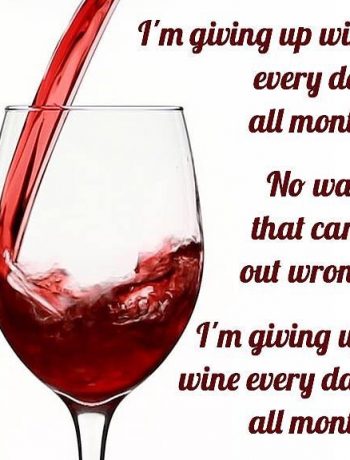 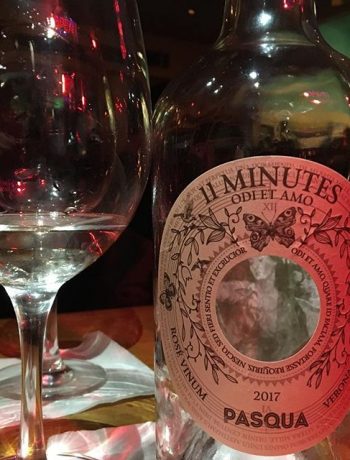