These are probably two of my favorite words in the whole English Language, besides words like Love and Peace.  As I told the organizer, this was one of the most brilliantly named events I’ve ever heard, everything explained in two simple words…Bacon & Barrels. And really after that what else needs to be said? I was eagerly anticipating this event, and apparently I wasn’t the only one, when tickets went on sale for the July 19-21 2013 event on April 1st, it sold out within 2 weeks. Doug and I donned our #ShareSLO shirts and off we went, heading down to Saarloos and Sons field in Santa Ynez, an area known for makin’ great bacon, and was the inspiration for the event. The participating Chefs were charged with making their best bacon creation that was to be judged by a panel of celebrity judges. The winning entry would be presented with the aptly named “Jefe del Porko” award, and the whole thing was being broadcast live by the Cork Dorks radio program.

Many of the dishes were meant to be paired with the various spirits and a kudos to the event coordinators in that many of the food and booze pairings were set up next to each other, so one didn’t have to guess which went with what. We arrived a bit early and already the line to get in was wrapped around its self. It was already turning out to be a very warm day, so we were grateful that the organizers had planned ahead and were providing water bottles to us waiting in line. The event started at noon and as the Church bells began to chime at 12:00pm, the line began to move. As we entered we could hear the petting zoo piglets squealing away and got our glasses. You had a choice of a wine glass or a snifter. Doug got the snifter and I got a wine glass, and we were off and running, straight to the first food vendor (since we hadn’t eaten breakfast and were starving) we saw, who was serving Diver Scallop topped with Wild Boar Pork Belly, Mango and Strawberry Salsa and BBQ sauce. But not listening to my own intuition that it was probably not the best idea to eat the sun warmed scallop, as delicious as it was, was a mistake that would come back to bite me about 1 1/2 – 2 hours later. Next were the Manhattans by The Willows at the Chumash Casino. Made with Antica Sweet Vermouth, Spice box whiskey, Pendleton whiskey, Luxardo liqueur, and Bitters, it is then aged for 51 days and washed in bacon fat, which was served to us in ice shot glass with drunken cherries. Oh my gosh so YUMMY! And the ice shot glasses were so refreshing against the heat of the day. I left my ice shot glass on the table but Doug smartly took his, so it just meant I had to go back for seconds later on. Then we made our way over to the booth for Root 246, a restaurant located in Solvang and tried their home-brewed bathtub vodka-gin Gimlet which was paired with a pulled pork sammy. The baguette was obviously home-made and wonderfully chewy and the Pork Sirloin with Blackberry, Poblano Salsa was tender and very tasty and the Gimlet was just right, a combination of sweet and tart- a great pairing all around. We walked over to the Consilience Tre Anelli booth and I discovered the Loureiro (pronounced Loh-RAY-roo) a white varietal I’d never had before. So of course I had to try it! It had flavors of lime blossom and tropical fruits with an easy minerality and hints of Japanese Shiso leaf. At this point we decided to walk over to Ninkasi Brewing and tapped a glass of Believer Double Red Ale, and were promised a taste later in the afternoon of the Maiden the Shade Specialty Ale, which is their tribute to Iron Maiden.  We decided to go see if we could find Cork Dork and #ShareSLO Street team member Adam Montiel in the VIP area, set up in the backyard of the winery. There was a musician singing some songs and blankets set up under trees as well as some couches and chairs set up for the radio program.  A menu of tasty bites was being prepared by Alfresco Picnic (runner-up Jefe del Porko) which included things like Braised Bacon Tacos, Tomato, Bacon Salad with Avocado dressing, Maple Syrup Bacon in Chocolate Granache and Chorizo stuffed Dates wrapped in Bacon- absolutely delish! Since Adam wasn’t there we headed back out and stopped at the ButtonWood Winery booth who was serving their 09 Cabernet Franc and their 2012 Zingy a Sauvignon Blanc.  I being a big Cab Franc girl, got a pour of that and Doug got a pour of the Zingy, both very nice wines.  It was then that I was reminded we HAD to stop by the Refugio Ranch Winery booth for some of their absolutely wonderful and refreshing (in the heat, this became the word of the day), homemade Lavender Lemonade with a float of their 2012 Agua Dulce De Refugio made from Malvasia Bianca. It’s a beautifully aromatic wine with florals, tropical fruits, and hints of citrus. I have had this before and I just LOVE it not to mention it’s perfect for a hot day. Then it was off  to the Fresco Valley Cafe table for mini Quiche squares, Doug tried the Maple Bacon with Goat Cheese and I had the Smoked Bacon and Chipotle Chedder- both of which were very savory and rich with a light buttery crust and very good. Then we found Ascendant Spirits and Doug was in his own kind of heaven! Ascendant is the first distillery to open in Santa Barbara County since Prohibition and they were serving their Breaker Bourbon Whiskey.  Doug is a huge Bourbon fan so finding out there is a local distillery in the area was very exciting.  Made in small batches from organic ingredients and aged for 5 years they are well on their way to producing great grain spirits. There were also a couple other Distilleries there including American Harvest Spirits  who makes sustainable, organic vodka from wheat and Laphroaig (La-froyg) Single Malt Scotch Whisky. In the spirit of the event Laphroaig made probably the most unique whiskey ever, since it was infused with bacon fat making it taste like fat and smoke- it even left a filmy feeling on the palate (like after eating a McDonald’s french fry). Located on the Scottish Island of Islay they have a unique history and when you become a Friend of Laphroig (LOF) you get your own personal square foot of Islay from a portion of the land they own. Each plot is registered and you may visit it (or view your plot on their members website). And the Jefe del Porko winner is…!

Unfortunately as we were walking to the next booth this was about the time the Scallop mistake kicked in. I was suddenly unbearably hot, and became very nauseous, and clammy. I won’t go into detail but suffice it to say we ended up back in the VIP area under a tree and eventually moving to the couch with me trying to recover drinking lots of water and trying not to faint. Sadly for the better part of the afternoon every time I stood up I felt like I was going to pass out, so I spent the rest of the day sitting with the Cork Dorks watching them interviewing the various participants; and sending Doug out on runs to get me tastes of the various things that were being talked about. The most talked about dish of the event was the Kobe Beef Slider with a chunk of fatty bacon, caramelized onions and garlic aioli on a freshly made brioche bun created by Sides Hardware and Shoes Restaurant. This was also the 1st place winner of the Jefe del Porko trophy, and deservedly so, it was ridiculous!

As much as I wanted to stay for the after party at Refugio Ranch winery, Doug and I decided since I was still trying to recover and he was tired we were going to head out. On the way we saw my friend from Cold Heaven Cellars who was serving their Pinot and their Viognier which is what I tasted.  There was also an ice-cold Anaheim chili pepper sitting in the display which I promptly procured and put against my clammy skin because the coolness felt so good. I’d also like to say THANK YOU to the people at EVO water who very kindly gave me a bottle of their chilled Pomelo infused sparkling water.  The Pomelo gives it a very slight hint of citrus and the carbonation really helped settle my stomach. That, along with my trusty Anaheim Pepper, helped cool me down the rest of the way to the car.

So in closing, here are the lessons I learned as a result of attending Bacon and Barrels…I know the most AMAZING, wonderful people, Bacon and Barrels is put on by terrific folks and is a GREAT event that will only get better, don’t wear jeans and a 3/4 sleeve baseball jersey to Santa Ynez in July (even if it is to promote ‪#‎ShareSLO‬), stay hydrated, bring sunblock and/or a hat, whatever you do don’t eat a sun warmed scallop on a hot day, and no matter how nauseous, clammy and hot you feel as a result of said scallop, don’t put the very cold Anaheim Pepper in your cleavage. It makes for a not so lovely skin reaction!!! 🙂

You pretty much can’t get away from bacon or whiskey in the South. Put a doughnut in it and you’d be good to go.
Hillary Scott

Keep an eye out for us at these great upcoming events: 8/11/13 Central Coast Chili Festival  and 8/24/13 Paso Robles Gourmet Mac and Cheese Fest 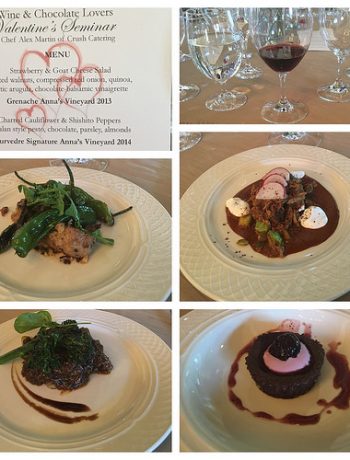