Taste of the Valleys Pismo Beach

There is a little wine bar and shop in Pismo beach called Taste of the Valleys. It’s owned by Ash Mehta a charming fellow, and worked by his lovely partner Lissa, although you can usually find Ash behind the bar too or milling around chatting it up with regulars. ToV actually has a flagship location in Solvang as well, but we are going to discuss the Pismo location since that is were we go.

Taste of the Valleys’ focus is mainly on local, mostly Santa Barbara wines but includes wines from wineries up and down the Central Coast. The cool thing about ToV is they carry an extensive wine list, about 650 wines and almost all of them are available by the glass. They offer flights both red and white, or a combination of both. They offer 1 oz pours of  6 wines in each flight for a total of 6oz, and prices per flight range from around $10 – $15 depending on the flight.

The flight we had when we went in, was the combo red and white and we started with a 2010 Stoneleigh Sauvignon Blanc  out of New Zealand. The winery is located on the northern side of the Wairau valley and the wine maker is Jamie Marfell. He’s made a nicely balanced wine that has a tropical and citrus nose and on the palate, a minerality with grass and mild acid. It’s a crisp wine and it took Double Gold at the San Francisco Wine show.

Speizer’s 2010 Chardonnay is made by the previous owner of Domain Alfred Winery/ Chamisal Vineyards, Alfred “Terry” Speizer. He has created a cold climate no oak Chardonnay from Edna Valley, that has light floral notes and some hints of citrus I’m thinking, orange or tangerine. On the palate there is no butter since it wasn’t aged in oak and it’s fruity with light minerals along with touches of nectarines. It has some acid but is still quite balanced. I found it to be a bit briny though Doug found it astringent.

Next we had the Leitz Out 2009 Riesling from Germany, it had oily notes with pit fruit and honeysuckle, lime and orange in the background. It tasted of honeysuckle and orange and the finish is all the way through. It is a very balanced wine with a little brine, and not overly sweet. It tastes a lot like it smells with a mild finish, and a mild acid that lingers on the tongue.

The Reds all of which were from Paso Robles, with the exception of Meiomi which is from Napa Valley, were completely different and offered something unique and unto themselves. The Meiomi 2010 Pinot Noir had a litany of bouquets that started with smoke, tobacco and cherry, with hints of  leather, patchouli, molasses, along with burnt sugar, sweet potato, raspberries, cassis, and licorice spice. All that just from smelling the wine? I know pretty impressive right? Well it helps when you have 3 other noses all volunteering their opinions on what they picked up too, which just goes to show how subjective wine tasting and smelling really is. Then it came to the taste which was immediately a shot of caramelized brown sugar, dark wild cherry, add to that sweet potato, really mild white pepper, with sage herb, juicy dark black fruit, and a touch of marshmallow with a velvety mouth feel.

I’m starting to get into the whole Spanish wine varietals thing, and I find I really like Tempranillos. The 2009 Hearst Ranch “Chileano” Tempranillo is made in the style of one of the most legendary regions of Spain, the Ribera del Duero located in central Spain. It had smoke, leather, and raspberries on the nose and smelled like a just opened jar of berry jam. On the palate it tasted like juicy, jammy, dark fruits, and blackberry pie; with mild tannins on the tongue and was also nicely balanced.

After the Tempranillo we tried the Rangeland 2009 Zinfandel. It had a light alcohol smell so it was not as good on the nose as it was in the mouth, in other words it tasted better than it smelled. It was hard to pick out individual scents, maybe light cherry. The wine tasted soft and elegant, with red fruits like raspberries, cherry, strawberries and hints of mild pepper.

We found the Pianetta 2009 Petite Sirah to have a medicinal nose almost like horehound, eucalyptus or Ricola cough drop, with plum. It was astringent, with a bit of barnyard. On the palate the taste was plumy but not layered and had no complexity. The nose belies the palate and tastes better than it smells

Doug was the first to claim this Barrel 27  Head Honcho 2007 Syrah as his favorite, it was inky almost black in color and plumy with currants and cotton candy. Though in the end it was everyone’s hands down favorite, everybody loved it. In the mouth the wine was jammy and spicy. It was well structured and acidic but nicely well rounded. This is a wine you can drink now or lay it down for a few years and it will just continue to get better.

With all the wines and flights Taste of the Valley’s offers, its good to know they also offer a small selection of nibbles including flatbread pizzas and chocolate truffles. But if you are interested in something more substantial they will allow you to bring in take out from a variety of local restaurants near by.

“Drinking good wine with good food in good company is one of life’s most civilized pleasures.”  Michael Broadbent 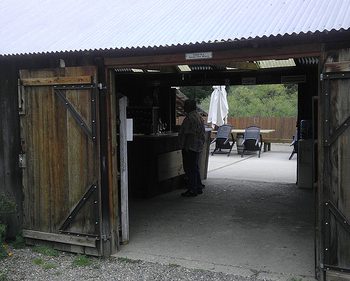