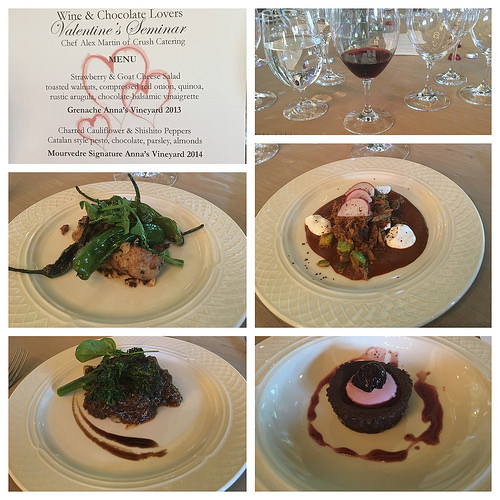 There are so many things to love about Adelaida Winery, though it’s hard not to start with Glenn Mitton who is the Wine Librarian, Brand Ambassador and just one of our all around favorite people. His silky British accent, vibrant blue eyes and ready smile are immediately disarming and draw you into being willing to listen to pretty much anything he has to say. He could read the phone book and I’d happily sit and listen. 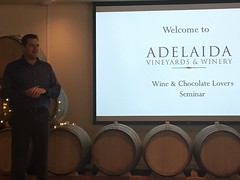 He’s always been a wonderful host when I’ve brought people to the property; taking us on great personalized tours of the vineyards, winery and the new stunningly appointed tasting room. He’s unbelievably knowledgeable with a long history in the wine industry starting with having owned a wine shop in his native Northern England, all the way to his current position at Adelaida. So when he mentioned he’d be moderating a wine and chocolate pairing at the winery for Valentine’s day last year, there was NO WAY we were going to miss it.

Let me start by saying I’ve been to a couple of these “types” of pairing events at other wineries so I came in with a preconceived notion of what to expect. You know, some great wine paired with different flavored truffles or chocolate nibs from a local chocolatier- maybe some brownie bites, stuff like that.  Well, let me say my preconceived notion was completely blown out of the water when we were ushered down into the winery where tables were set up and menus were placed at each seat announcing that local Chef, Alex Martin of Crush Catering, would be serving a complete 5 course luncheon menu of chocolate themed dishes paired with some of Adelaida’s signature wines. 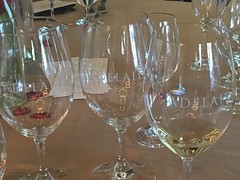 Prepping for the tasting!

Upon arrival in the winery we were greeted with a glass of Chardonnay and encouraged to mingle and pick a seat. Glenn had set up a screen onto which he projected an informative slide show, with the  presentation focusing on the origins of chocolate, and of each vineyard and wine presented.

Our first dish was a Strawberry and Goat Cheese Salad, topped with toasted walnuts, compressed red onion, quinoa, rustic arugula and drizzled with a chocolate balsamic vinaigrette which was well paired with a 2013 Grenache from Anna’s Vineyard.

Anna’s Vineyard is host to 6 red and 4 white Rhone varietals. It is a mountainous 51 acres on the west side of Paso Robles, that at the higher elevations is strictly divided between the 6 red varietals which were planted between 2001 and 2004. They lie between 1,595 and 1,935 feet in elevation, 14 miles from the Pacific Ocean, on a steep 30 degree south-facing slope that offers ideal sun exposure. While the 4 white varietals were planted in 2007 at the lower elevations to promote a pooling effect of cool air.


Next came Charred Cauliflower and Shishito Peppers with a Catalan style pesto, chocolate, parsley and almonds. In that I’m not a spicy heat fan (Shishitos can be unpredictable and this batch were on the hot side, naturally Doug loved them) I took a tiny bite of the peppers to get the general idea and left the rest for Doug. The dish was paired with the Mourvedre Signature Anna’s Vineyard 2014.

The Signature label signifies grapes designated as coming from the best steep sloped, sun exposed vineyard site and as having gone through a “best of” barrel selection process. Adelaida has refined their sustainability farming practices; thus they’ve been able to include deficit irrigation, mid-season pruning and shade cloth, which extends the ripening cycle and increases the phenolics. 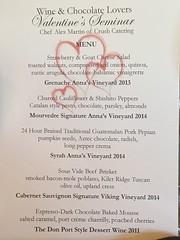 The vineyard management for the Syrah vines has them on a drip watering system and planted on lime tolerant root-stock using vertical shoot training. The 2014 drought conditions brought with it, an historically early bud break in the vineyard. That combined with a mid summer cool-down in August, subsequently extended the fruit hang-time allowing for the grapes to be picked later than in previous vintages. The grapes were harvested, fermented in stainless open top tanks, and moved to barrel for aging. This blend of terrior and Winemaker Jeremy Weintraub’s process, created a deeply colored and densely fruited masculine wine, that paired very well with the dish.

The Viking Vineyard is a a true mountain site whose original vines date back to 1991 and is comprised of 16.5 acres- 13 of which are wholly dedicated to Cabernet Sauvignon. It’s proximity to the ocean allows for the maritime influences the Paso Robles Adelaida District is known for; and is planted with grafted lime tolerant root-stock in limestone soil that sits on an extremely steep, south-facing slope. This makes for quite a challenging grape growing environment. As a result, the vine spacing is the tightest of all seven of Adelaida’s vineyards-with 4 feet between the vines and 8 feet between the rows. The vineyard has an average yield of 2 – 2.5 tons per acre of Cabernet. They harvested the Cabernet was toward the end of September from the upper elevation’s best blocks. A small, selection of destemmed grapes were then “barrel fermented” with native yeast, in new French oak. Because this winery specific method is so labor intensive, this process is reserved only for  the best lot designations i.e. Signature status. It entails removing and resealing the barrel end cap, then the barrels are loaded on to a unique rack system and spun. This allows for the incorporation of a more integrated toasted oak complexity into the fermenting must. The “free run” finished wine was then put into to specially coopered French oak barrels made from slow-growing oaks in the northern forests, and allowed to mature for 20 months.

For dessert we were treated to Espresso-Dark Chocolate Baked Mousse, salted caramel, port creme Chantilly, and poached cherries coupled with The Don Port 2011. The mix of Portuguese grapes-Touriga Nacional, Tinto Cao and Souzou were planted in 2001, on sandy loam soil, covering a west-facing slope at the entrance to the winery, in an area known as Bobcat Crossing. The Port is named for winery co-founder Don Van Steenwyk, and is Adelaida’s interpretation of a Vintage Port.

This is not a late harvest style wine, the grapes were harvested at normal red wine Brix levels and co-fermented on native yeast. Towards the end of the primary fermentation, the remaining residual sugar measurements are taken, and a grape spirit is added to the must. This raises the alcohol level to 20% and kills the yeast cells. The wine was then moved to neutral oak barrels and aged for five years in the casks.


This was an incredible experience with interesting pairings and inspired dishes…I mean who doesn’t love wine and chocolate? I mean, we know somewhere people like that exist and all, but thankfully no one we know! LOL

Since Valentine’s day falls mid-week this year on the weekend after Valentine’s day (Feb 17-18), Adelaida will be hosting a Saturday night winemaker dinner, and a Rhone Rangers grand tasting in conjunction with Broken Earth Winery on Sunday. Both great, not to be missed events.

Once we hit forty, women only have about four taste buds left: one for vodka, one for wine, one for cheese, and one for chocolate. ~Gina Barreca 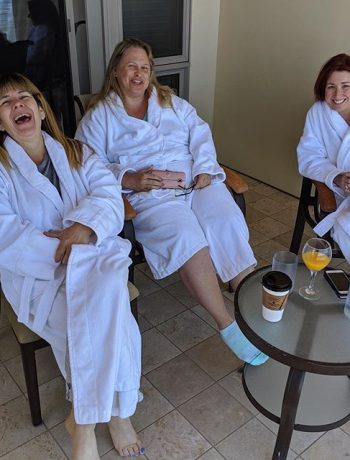 Good Morning! Coffee and Mimosas on the balcony with my bestie @dolphinbayresort_ #birthdayweekend 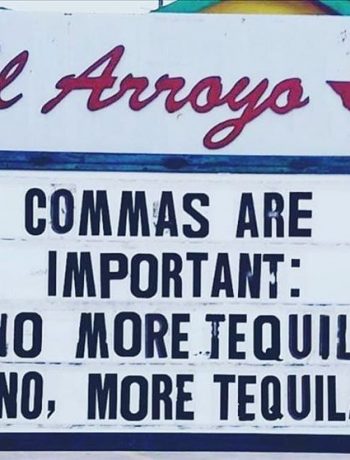