Holy Crap Balls, what a “weekend!” President’s Day weekend started with a Hangar 24 Tap Takeover at The Boardroom in Pismo Beach on Friday, and the Rhone Rangers Grand Tasting at Broken Earth Winery on Sunday. Then to an exquisite luncheon at Thomas Hill Organics on Monday put on by the Paso Robles Cab Collective (PRCC) and Parker Sanpei PR (which I will write about in a separate blog posting), and lastly it was on to a “whale” party put on by our friends at Central Coast Distributors.  With such an awesome lineup it’s hard to even know where to start, so I guess at the beginning. 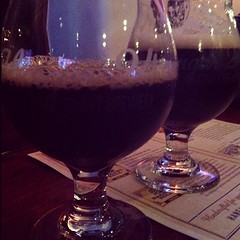 Let me start by saying I’m a Hangar 24 fan. They make one of my favorite beers, the Pugachev’s Cobra, that a friend introduced me to and with which I have had several interesting experiences enjoying.  But that’s another conversation entirely.  Nonetheless Pugachev’s is a rich, black, Russian Imperial Stout that is aged for 8 months in oak bourbon barrels which imparts a sticky, vanilla, caramel aroma topped with bourbon.  On the palate of course it’s got bourbon, chocolate, and coffee that just wash over your tongue like a waterfall. It’s brewed with three different dark roasted malts and infused with maple syrup. This is a beer that can be drank now or laid down and aged in the wine cellar for a few years.  First released in 2010, this beer is released in vintages – 2013 being the third. There were other beers on the list, too, like the Gourdgeous, a beer dedicated to Autumn and made with locally grown pumpkins, pumpkin pie spices and molasses. Over 1000 pounds of pumpkin was used to make the beer, so of course it tasted of pumpkins, with dark chocolate and gooey caramel. Part of their Local Fields Series, it becomes available for purchase in October. 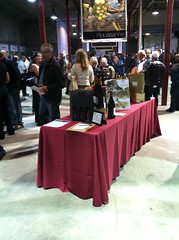 The  Rhone Rangers are a nationwide organization dedicated to advancing the reputation of Rhone grapes grown in America instead of just from the Rhone Valley in France.  After wanting to go to this event for many years, I finally got a chance to attend the Grand Tasting.  It consisted of somewhere around 150 wineries, all serving  wines that were made from the 22 red and white Rhone varietals.  For a wine to be poured at an official Rhone Ranger tasting, 75% of the blend must be comprised of some variation of the 22 varietals.
Although I only attended the Grand Tasting, the entire day also consisted of a seminar, a luncheon and a silent auction.  The Grand Tasting was a walk-around event in a room that seemed to be the size of a football field!  With so many wineries present, I had to do something terribly out of character and actually pick and choose how much I tasted at each table – otherwise I’d never make it out of there.  I decided the best strategy was to go to the newer wineries I hadn’t tried yet and at every table try the wine they felt most represented their winery.  It became a real Sophie’s Choice moment for them because winemakers think of each wine as their child and can’t always pick just one.  Even with that strategy, I was feeling mighty happy by the time we left.  One of the nice things they had was Vivant cheese being served in the center of the room, which was helpful for a pairing, palate cleansing and just taking a break.  Since there are so many wineries in the Paso chapter I’ve included a list of the member wineries, many of whom were present. Lovin’ what’s in front of me!

The Cab Collective luncheon consisted of 26 different wines all to be tasted before lunch! Add to that the 2 more served with lunch and I can tell you it was quite an amazing afternoon. You can read all about this incredible event on my upcoming blog “26 reasons to wine!” Sooo what the heck is a Whale Party, you ask?  Well according to our host and owner of Central Coast Distributors Mike Larabee, a “Whale” is loosely interpreted to be a beer that is highly rated on Rate Beer, Beer Advocate or from a similar rating system. The beers brought to the party should not be available at a large grocery or commercial type store, nor should it be something that you think is not going to show well to people who really know their beer.  Though this is not a hard and fast rule, any bottle brought should be worth at least $20 or more. The value of the experience and how well the tasting goes is completely dependent on the attendees. Needless to say that it really helps having people who own bars, breweries and distribution companies in attendance. I unfortunately only got to come for the last half hour of this incredible party because I had school, but I tell you what, even though so many empty bottles were lined up all across the floor, thankfully I still got a chance to taste some amazing beers. Picture on the left is what had been ingested when I arrived, on the right, 30 minutes later!!! (BTW these are 750ml bottles)

You too can have your own Whale party, just make sure everyone knows the beer purchasing/bringing rules, add a pot luck and have a blast! Just in case you were wondering what we brought to the party, our contribution was Old Numbskull In Rye Whiskey Barrels brewed by AleSmith Brewing Company.  And should you decide to have a “whale” of a good time yourself, make sure you have plenty of designated drivers because if your party ends up being anything like our party…

Beauty is in the eye of the beerholder. ~Richard Samet “Kinky” Friedman

Sidecar is No Sideshow: A Foodie Mecca in San Luis Obispo?! 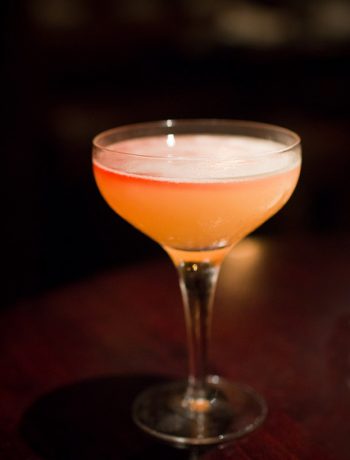