The President’s day holiday allowed us to attend the Paso Cab Collective luncheon led by Linda Parker Sanpei and Michael Mooney winemaker extraordinaire, and owner of Chateau Margene.  I was very honored to be one of a very, small, handful of press to be invited to this amazing event. Doug and I were joined at the table by Linda, and Michael along with Jonathan Cristaldi from Tasting Panel magazine, Tom Wilmer (author, NPR podcaster and travel writer), Katie Budge from the Tribune, and WendyThies Sell.

San Luis Obispo has a reputation for our great Zinfandels and Rhone wines (which are amazing!), but did you know that only 16% of the wines grown here are Rhone varietals? The Cab Collective was started a little over a year ago, to promote the 55% of grapes grown that are Bordeaux varietals.  Paso has such a dramatic heat index and 45 different types of soil, allowing for 11 distinct AVA (American Viticultural Area) districts.  As a result Paso cabs all taste different based on which district they are grown in, clone types, how the canopy is managed, and on and on. That doesn’t even take into account the different types of oak barrels they are aged in or the talents of the winemaker. Paso is now following a model in which every bottle of wine sold in any part of the AVA must say Paso Robles on the bottle. The Collective had arranged for us to try 26 Cab/Bordeaux wines. We arrived at Thomas Hill Organics at noon Doug and I figured we were going to be pairing the wines with lunch. That was not exactly correct, all 26 bottles were tasted and discussed before lunch! It was very fast; we got our pours, tasted and dumped. It was almost sacrilegious watching all that wonderful wine (and it was wonderful) go into a dump bucket, but we were there for a reason and that was to learn, discuss and report back to you. All of the wines we tasted were from different parts of Paso and from the $30 range up to $225. So starting with the first bottle and running all the way through to the last bottle here is everything I learned about the wines and the wineries.

Record Family Vineyards 2011 Merlot -Record is a small family winery who  farm on 100 acres and currently only make Merlot. They’ve produced only 75 cases of this Merlot, and have a production of less than 800 cases total. They are expanding growth into 30 acres of Cab.

Le Vigne 2010  Cabernet Sauvignon- I’ve written about LeVigne before and their amazing white truffle wine dinner. They are also a small producer with under 2000 cases annually over all. Their Cab production is under 1000 cases, and this particular wine had defined black and white pepper on the palate.

Eberle 2010 Estate bottled Cabernet Sauvignon – Eberle has a production 1900 cases. This is a very juicy wine on the nose and literally tastes like a grape squishing in your mouth. It has a minerality with essences of iron that would go very nicely with a bloody filet.  It is sold commercially for around $34.

Halter Ranch 2010 Estate Reserve Ancestor– As brand new member to the collective they really pulled out the stops offering this wine.  I really liked the Ancestor it is a very nice wine, and was definitely popular among the tasters. It is a blend of 39% Cab Sauv, 35% Petite Verdot, and 26% Malbec. It comes in at a $50 price point and only has a 900 case production.  Aged 18 months in French oak barrels, 50% of which were new oak the winemaker hand-picked the barrels of wine for each varietal in the blend. 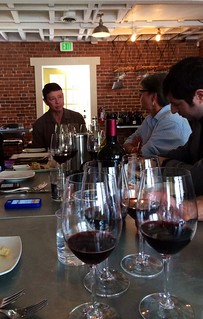 Robert Hall 2011 Meritage–  An estate-grown Meritage this is a classic blend of four noble grapes- Cabernet Sauvignon, Merlot, Cabernet Franc, and Petite Verdot. At first blush I found it to be reminiscent of Apothic Red on the palate; with big, juicy, ripe fruit and a rich, ruby color. It sells for around $40.

Peachy Canyon 2011 Para Siempre– This wine was both acidic and tannic, with a minerality that was derived from the concrete tanks it is aged in. There are only 380 cases produced and sells for $55 a bottle.

Vina Robles 2009 Suendero– pronounced Suen•de•ro [swen-dé-ro] this is a Meritage containing Cabernet Sauvignon and Petit Verdot. It’s a full bodied, dark garnet colored wine that I found to be very tannic, with spicy licorice, I could feel a heat on the inside of my cheeks. This is a wine that should be decanted for 2 hours prior to drinking, and can be laid down for at least another 5 years. The recommendation is to drink in 2019. Vina Robles makes 308 cases.

Ancient Peaks Oyster Ridge 2010– After spending 24 months in 94% French oak and 6% American oak this Cabernet Sauvignon, Merlot, Petit Verdot, Cab Franc, with a smidge of Petite Sirah, blend is from Margarita Ridge Vineyard.  Michael Sinor the Director of Winemaking, (and also the owner/winemaker of Sinor-La Valle Winery), made this wine for Ancient Peaks. The nose is floral and has red fruits on the palate. They produce around 688 cases of this wine.

Good for Nothing Lloyd of Calcareous 2010 -This blend from Calcareous is made up of 24% malbec, 21% Cab Sauvignon, 19% Cab Franc, 19% Petit Verdot, and 17% Merlot and is aged for 31 months in 20% French Taransaud, 20% French Meyrieux, and 60% Neutral French oak. This was a favorite and has a lot going on with many layers. It’s tannic, but very nicely balanced and will age well. There are only 520 cases of this wine produced.

Adelaida 2010 Cab Sauvignon Viking Estate Vineyard-This is a classic, full-bodied, 100% Cabernet Sauvignon. I found it to be extremely enjoyable, in fact the word fantastic comes to mind. A perfect wine to cellar up to 15 years and should be drunk between 2016-2025. They produce 235 cases at a price of $75. 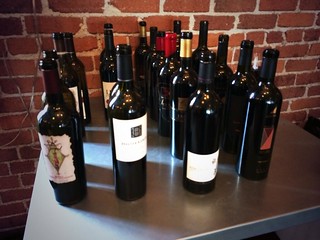 A collection of Cabs Pic by Wendy Thiess Sell

J. Lohr 2010 Cuvee Pom- Comprised of Merlot 62%, Cabernet Sauvignon 20%, Cabernet Franc 18%, the first thought I had when I tasted this wine was it smells like a nicely seasoned steak.  A very good, very pretty, wine and the winery offers a very small vintage in comparison to their other wines. We found it to be a really a stand out wine. They did a great job of imitating wines straight out of the Bordeaux region of France. Even though J. Lohr is a large commercial winery and has a large case production in general, this wine is limited with only a 300 case production and sells for $58 a bottle.

Sextant Kamal 2011 Cabernet Sauvignon– With rich flavors of black fruits that wash over your palate and Bordeaux style winemaking this wine is very tasty. Aged 35 months in 30% New French Oak this 100% Cabernet from the Pomar district is a very small production wine with only a few hundred cases produced. It sells for $50 and can be enjoyed now or cellared for the next 6 years.

Daou Reserve 2011 Cabernet Sauvignon-This guy needs time to open up, but offers a big nose with layered black fruit and wood. A blend of 7% Cab franc, 5% Merlot, 9% Petit Verdot it spent 19 months in 80% new French oak. It’s fruit forward and can be opened off the shelf or savored anytime over the next 10 years. It sells for about $50.

Bon Niche 2010 Voûtes -Is a 45% Malbec, 45% Petit Verdot, 10% Cabernet Sauvignon blend.  It’s rich in color and on the palate juicy and jammy. It has a viscus mouth feel and is very chewy. I really enjoyed the wine and found it to be very nice and well-balanced. Bon Niche is a brand new member of the collective and this wine sells for around $40.

Hunt Cellars 2009 CabOvation Cabernet Sauvignon Reserve-  I have heard wonderful things about this winery and wine, but I am not going to do a review of this particular bottle because it would be unfair. Sadly the bottle I tasted had something known as wine fault which made the wine oxidated, and reminiscent of nail polish. So I will reserve judgment and wait to post about it until I have an opportunity try it again.

Justin 2011 Isosceles– Is kind of a Central Coast staple. Always a top wine in the area this one is a blend of 81% Cab Sauv, 12% Merlot, 7%  Cab Franc. It is unfiltered, aged for 21 months in oak and then moved to stainless steel open and closed top tanks. They’ve made it in the “left bank” style of Bordeaux. There are 462 bottles produced at $70 a bottle. It is best laid down in the cellar and drunk between 2015 – 2027.

Chateau Margene 2010 Reserve Cabernet Sauvignon – A blend of 90% Cabernet Sauvignon and 10% Cab Franc. Sells for $85 initially but once it has aged 5 years will be worth $225. Michael kept the fruit as the star with some cedar, and a big, long 45 second finish. It’s very smooth and should be kept for 4-5 years. An extremely good wine that spent 33 months in the barrel, and is made up of 30% new and 70% three-year old French Oak, that supplies the hints of cedar.
Chateau Margene focuses on the highest quality, aggressively hand pruning by removing 1/2 the growth right up front, after which, they handpick their grapes. They sort them out in the field and pull out all the MOG (material other than grapes) to ensure the best grapes go into making their wine.  Mike uses native yeast when possible in the production and keeps their yield small, with a total annual production of only about 3,000 cases. They have made the conscious decision to not grow any bigger as a winery. They sell out every year and have chosen to only sell directly to the consumer.  95% of their sales are direct through the tasting room or wine club. Mike does everything from growing the grapes, to making the wines, to cleaning the winery.  He will always only use corks in the bottle to allow for breathing and great aging.  The we had and lunch and ’05 shows extraordinarily well.  The time in the bottle allowed for the flavors to integrate so it’s almost like a blend…dramatically different on the nose and the palate is out of this world.  Absolutely beautiful.  This is a “luxury” brand and deserves the distinction.

Cass 2007 Estate Grown Cabernet Sauvignon-  This was the last and oldest wine tasted during the actual tasting (prior to lunch) we tried. I found it to be very soft, with tobacco spice.

In the end I didn’t meet a wine, I didn’t like.  Some stood out more than others but they were all fantastic and definitely worth trying and experiencing if you make it up to Paso. But don’t just stop at those…there are 270 wine producers in Paso Robles and that doesn’t include all the small and boutique wineries.

“The flavor of wine is like delicate poetry.” – Louis Pasteur

Why Is It So Hard To Get Good Seafood By The Sea?

The continued adventure of The Faaabulouuus Fedora Four…